GET IN TOUCH WITH US

Tnemec coating systems were specified for an integral area of the development. “Tnemec is known in the industry for these types of installations,” said Tnemec coating consultant, David Walker. He went on to add, “The contractor knew that our coating systems could do the job for the critical research areas that required the extra protection; of course, they were also confident in the expertise of Applied Industrial Flooring as the right choice of applicator for the project.”

The surgery rooms specified Series 237 Power-Tread, a modified polyamine epoxy, trowel-applied at ¼” thickness, followed by Series 280 Tneme-Glaze, an epoxy to build up volume. The topcoat was Series 291 CRU, an aliphatic urethane finish.

The remainder of the block walls were coated with Series 130 Envirofill, a waterborne cementitious acrylic filler, and finished with two coats of Series 113 H.B. Tneme-Tufcoat, a high-performance, waterborne acrylic epoxy, roller-applied.

“This facility certainly added to the already impressive university campus,” noted Mark McLeod, President of Applied Industrial Flooring. “We were delighted to be a part of the process.”

University of Toronto and the Architects Alliance were equally impressed with the delivery and installation of the project. They recognized that they had performance and architectural aesthetic challenges.

The product and the company was able to meet the high standards the architects demanded. 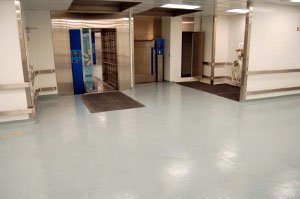 All Other Canadian Cities